A skill system for OD&D? 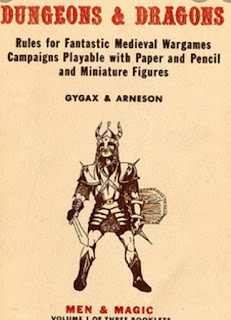 Many OD&D players and DMs like the fact there there isn't a full blown skill system in the game. Although such systems and mechanics developed in rpgs pretty quickly after OD&D's appearance, in games such as Traveller and Runequest. But TSR resisted the urge to add such things into D&D relying instead on the class system to provide the talents and skills available to the various professions and races. I, for one, am glad they did this. I find very few games have skill systems which really work seamlessly and all too easily clog up game play (or provide pedants and rules lawyers with ammunition to 'game' the system).

But, there are always those situations where the rules don't cover all of the possibilities and sometimes, the DM prefers a less dictatorial approach than simply ruling that this or that PC has or hasn't succeeded in, for instance, lighting a fire in a rainstorm. Most DMs eventually seem to have settled on 'The Ability Roll' as a method for judging such things. This most often takes the form of a 'roll under' your Str/Dex/Int or whatever using either 3d6 or 1d20 (both have advantages and disadvantages). In this mechanic, the DM judges which Ability Score is most appropriate to test for the task in hand, eg. Strength when testing if the PC manages to pull up his friend who is hanging over that precipice or Intelligence when trying to decode an ancient script. The problem with this is, that there is only one degree of difficulty, one target number the character must make. DMs can get round this by adding penalties or bonuses to rolls or target number, or by allowing more or fewer dice to be rolled etc. to simulate presumed levels of difficulty.

There is however, a pre-existing "skill vs difficulty level" system already at the core of the game. That is, the character class+level vs armour class to hit mechanism.

So, here is my (as yet un-tested) idea for using the to hit table as a skill resolution system for OD&D. It uses my philosophy of keeping the existing mechanics of OD&D to create new rules.

We use the OD&D Attack Matrix 1 and replace "Armor Class" with "Difficulty Level": 9 being relatively easy tasks and 2 being exceedingly difficult. You don't need to write out new tables, it's a concept shift only. "The 20 Sided Die Score to Hit by Level" becomes "D20 Score to succeed" and Bob's your uncle. But there's more. Unlike with the common "Make an Ability Check" hack, here, Ability Scores can make a real difference because the DM can add or subtract any bonuses and penalties the PC might have for high or low Ability scores. Here, you have two choices: you could use the -2 to +4 range given for Charisma and apply this to all of the PCs' Ability Scores or the more conservative -1 to +1 for above average (12) or below average (9)  Dexterity scores. So now if a task requires say, Strength, the player can use his Strength Abilty Score modifiers when he rolls vs Difficulty Level on our new Task Resolution table.

Furthermore, as the Attack Matrix is really three tables all in one, a DM could even judge that different classes might be better or less likely to be good at certain types of task by using a different one of the three matrices (Fighting-Man, Magic-User and Cleric). For example, a party must hastily erect a barricade before they are besieged by Orcs. The Fighter is best trained to organise this and so uses the Fighting-man Matrix. But later, our hero is required to write a letter to the Orc Prince asking for the return of prisoners. The DM might judge that his literacy skills might not be up to this, so he has to use the Magic-User Matrix to see if he is successful. Similarly, let's say a Magic-User is required to pull off some highly cerebral task. In this case the DM might consult the Fighting-Man Matrix because (as we are using a combat table) this might give an easier score to hit/succeed. Using this extra level of detail is really just replacing the different levels steps with a statement about the appropriateness of professional skills to the task in hand:

°Skills very appropriate- use level advances like a Fighting man (steps of 3 levels),

°Skills relatively appropriate, use the Cleric progression (steps of 4 levels),

°Skills not at all appropriate: use the magic user level progression of steps of 5.

This is nowhere near as complicated as my poor prose might make it sound and you don't need to use all of it. Simply swapping out Armor Class for Difficulty Level and everyone uses the basic Fighters' Matrix would still work.

I'm sure I can't be the first to have done this, so if you use a better version of this idea, I'd love to hear it. 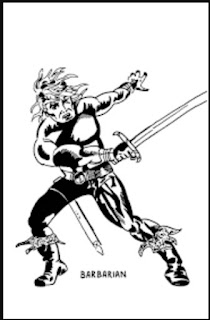