Phantasmagorical, Montie Haul Dungeon
Authors Larry Richardson, Kerry Lloyd and Rich Reichly were possibly too embarrassed to put Gamelords name to this so the adventure was published under the name ‘No-Shamelords’ instead (no doubt with tongue firmly planted in cheek).
For those who don’t know about this infamous adventure, it’s a two level dungeon built inside a pyramid and features as much pun laden nonesense as the authors dare use. There is no suggested level for characters to be in order to survive but the fact that the librarian in the first room is an unhinged vampire might give you a clue. Similarly, the statement in the introduction that at least one encounter will be with a monster of an AC of ‘nigh on infinity’ should warn players that taking your carefully honed 8th level magic user with a well crafted backstory and crew of loyal henchmen, might not be the thing to do. Leaving this dungeon as a corpse might be the least unpleasant outcome!
This shouldn’t be taken to mean that the dungeon is just a meat grinder, oh no, just that it’s as about as unpredictable as you could wish (or not). There are: sentient toilets, a library of magical books, the rabbit from Alice in Wonderland, a police station, a room of drunk dwarves who laugh even as you chop them up, a kind of gladatorial arena, a penguin who is also and artist and a room full of ‘groupies’ just dying to get their hands on a famous adventurer (for a little more than just his autograph). And thats not all.
To run this game well, you need to be a special kind of DM I would suggest. And your players would need to be up for it with PCs they have some investment in but don’t mind losing (or being transformed into something else).
As an artefact of the early days of gaming, it’s a brilliant bit of fun. One thing that intrigues me from a design point of view is that although obviously designed for Dungeons and Dragons, the writers have their own alternative set of Characteristics for each PC to have: Strength, Co-ordination, Reflexes, Stamina, Discretion (acts like Wisdom), IQ, Talent (ie psychic power), Magic Resistance, Magnetism (acts like Charisma) and Appearance. All rolled on 3d6. There are also rules for saving throws, all made on 2d12. There’s even a version of THAC0, here called HACØ. In fact, with the exception of a quick and dirty magic/psionics system, they manage to present enough material inside the front and back covers, to play the dungeon without any other set of rules if you wanted to. (As an aside, Gamelords did have a full Fantasy RPG in the pipeline which had a free form magic system. I don’t know if this was ever published though- Theives Guild fans, can you tell me?)
So, there you are. Not quite as bonkers as it might at first appear- but bonkers nontheless!
Different Worlds still have some in stock. Also, copies are all over ebay and Amazon for quite reasonable sums if you ever want to try this for yourself. If you do guys, please let us know how it went!
Posted by Jon Salway at 19:33 2 comments: 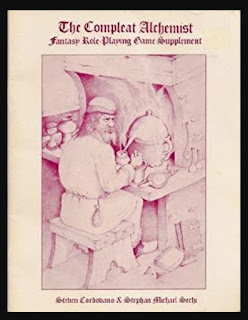 The Compleat Alchemist a 'Fantasy Role playing Game Supplement' as the subtitle has it, was written by Stephan Sechi and Steven Cordovano and published in 1983 by Bard Games- a company sent up by Sechi and Cordovano in order to market the book. There were two printings by Bard games. The first, and more hard to find, has a white cover, and the second and less rare one has a dark pink, burgundy colour.
The idea was to create a series of generic supplements for fantasy role playing games. By the time Bard Games folded in 1990 they had three 'Compleat...' books; The Compleat Alchemist, The Compleat Spell-Caster; and the Compleat Adventurer. Sechi was the driving force behind these and the later Atlantis rpg also known as Arcanum. He is better known perhaps as the author of Talisanta.
The Complete Alchemist is a 45 page perfect bound book, simply produced, with artwork and layout typical of the time. Some of the drawings by illustrator Joe Bouza are in fact very good.  Curiously, the layout (created on an electric typewriter it appears) changes in font and size throughout the book. This is possibly to differentiate rules from general information, but I personally find myself squinting at some of it. This isn't atypical, lots of Judges Guild work of the period is the same tiny fonts and Dave Hargrave's Arduin Grimoires often require a magnifying glass to read!
The content is pretty thorough. There's a section on how to roll up your Alchemist, the minimum stats he might need etc. As the book is designed to be 'generic', there are suggestions for creating Alchemists within 3d6 mechanics, percentile based mechanics and d20 games too. Some reviewers found this confusing at the time, but I think Sechi and Cordovano did quite a good job, if you read it carefully. The class itself has several specialist skills in assessing materials, mixing and preparing ingredients, plant and mineral identification skills etc, all of which increase as the character levels up. Alchemists it seems are also master linguists and decoders of ancient texts, so that they end up with the skills of magic users and clerics in reading magical languages and so on.
The bulk of the book describes these skills, and many more, in terms of levels as if they were spells. And then goes on the describe the potions, powders, mysterious substances and semi magical items an alchemist can make. There are extensive lists of herbs, precious and semi precious stones, rare earths (very important) plants and metals, together with their powers and properties. It's all quite clear and well done, extensive without being over done. Much of this section could easily be lifted and used in any other game even ones without Alchemists.
The question remains however, how a player would get on in a typical fantasy adventure. Eventually, he becomes a sort of walking arsenal of explosive, poisonous and mysterious weapons. But I think would be tied to his laboratory much more than other classes would be to their base of operations. There are notes for travelling cases of experimental equipment and mineral testing kits and so forth. But even so, having an alchemist in the party is definitely going to require some henchmen to lug around his kit!
Having such class as an NCP to support your crack team of murder hobos would be a great thing to have however and adventure hooks based around finding your boffin some rare earth from beyond the Misty Mountains would have a real point. Especially if he then made your party some brilliant gas bomb or some such to help crack the next dungeon.
Other versions of the alchemist class have of course been created. But if you are running a game that currently doesn't have such a class, this book would very easily be an excellent choice.
When Bard games folded, WoTC bought the licence and published a version of the Compleat Alchemist in 1993.
Posted by Jon Salway at 18:25 No comments: