Uprising at Buzzard's Gulch: a campaign setting for Monsters! Monsters! 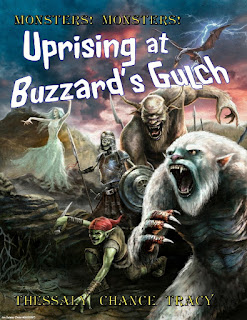 There's trouble on the Reservation.
Here's something new! There have been a few campaign settings for the Tunnels & Trolls suite of games, but not many. What makes this one stand out is not simply because it has added to the pool but because it is usable with- nay, designed specifically to go with, the Monsters! Monsters! variant of T&T. That makes it a very rare beast indeed. 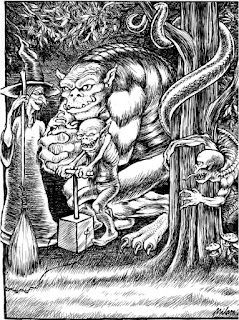 Uprising at Buzzard's Gulch Monster Rez (Rez, as in Reservation) is a setting guide and adventure seed set in a world (or part of Trollworld?) where humans and monsters live side by side- providing the monsters go back to the Reservation come nighttime. The title uses language redolent of the Wild West  and this puts you right into the zone for this setting. But we are playing Monsters! Monsters! here and the player-characters are supposed to be the bad guys, does that make the humans the goodies? Well, nope. The humans have, afterall herded up the monsters and put them in a reservation, and are exploiting them for their own gain. And now it seems, the monsters have had enough!
So what do you get for your money? Author, Thessaly Chance Tracy and publisher, Peryton Games give you a 93 page setting, nicely illustrated (the cover by Simon Lee Tranter is great), edited by the Troll Godfather himself and a minion called Monkey. The action is set on an island and can therefore be smuggled into most campaigns. There are maps, npcs a plenty, descriptions of places of note, the High City of Hylax, villages of The Rez, bars, brothels, revolting swampy areas that humans will hate but monsters (some of them) will enjoy. There are lists of foodstuffs, potions, diseases, random encounters, tribes of goblins and quite a few wicked and devious humans. As you'd expect there's a little history too. But there's more: new spells, new monsters, new kin and some extra rules for the Monsters! Monsters! game including monster talents and motivations. 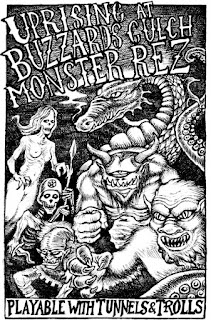 The tone of the whole thing is as whimsical as one might expect for a T&T product and with an undercurrent of darkness. You get the feeling this town is gonna blow! There are some really noteble NPCs too. My favourites are Grimlar Steele, a mechanical monster who lives at the castle and Granny Grisstletit, a Madam, business woman of repute and potion brewer on the side.
There's a lot packed into these pages and yet the author hasn't fallen into the trap, as some campaign settings do, of getting bogged down in too much detail and history. Each place is described with brevity. Giving the GM easily enough to go on but at the same time, plenty of room for his/her own take on things.
Altogether, a really nice package and a great addition to the Monsters! Monsters! and Tunnels & Trolls games.
Posted by Jon Salway at 17:22 1 comment: