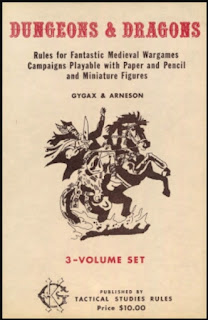 Gygax's House Rules for OD&D.
Three years before his death 2008, Gary ran an OD&D campaign for his group. This is a compilation of notes about the rules for that campaign, with my comments following. This information was gained from answers given in Gary's Q&A threads on ENWorld as well as some tales of the campaign posted by Deogolf. They boil down to these:
Rules
• Only use the three little books- Gary didn't use anything from the supplements.
Character Generation and Advancement
• Ability scores rolled as best 3 out of 4d6. Scores are arranged to taste.
• PCs started at 3rd level.
• Fighters get +1 HP/die. All PCs get +1 HP/die if Con >14.
• No training necessary to gain a level.

Initiative and surprise
• 1d6 for surprise: 1=1 round, 2=2 rounds. 3 or more= no surprise.
• PCs must declare actions before initiative. Caster's must declare the specific spell being cast.
• 1d6 for initiative. A tie means simultaneous combat.
• A casting spell caster who loses initiative will lose his spell if hit.
Combat
• All PCs get 1d6 hp/level. HP rolls are re-rolled on a 1.
• Fighters do +1 damage if Strength> 14.
• Dexterity does not affect AC.
• Dexterity does affect missile attack "to hit" rolls.
• PCs are unconscious at 0 hp. They can go as low as level +1 before death (e.g a 4th level fighter can be brought as low as -5 hp and just be unconscious). A healing potion or cure spell will restore them immediately.

Spells & Spell Books
• To acquire new spells, casters must find scrolls, spellbooks, or a friendly higher-level caster.
• Clerics don't need spell books (The original books can be read to imply that they do).
Magic items
• Gary identified most magic items immediately on return from the dungeon (by charging large sums of money for this service, when players rest and recouperate in town).
• Potions must be tasted to identify them however.
• Unusual items require a trip to a very high level Magic-User. 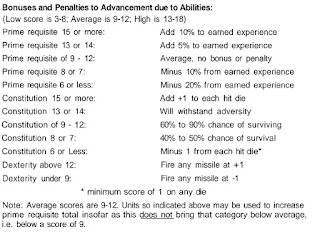 I find these house rules interesting in several ways. The first thing that strikes me is how few of them there are. This is Gary playing more than 30 years after the game was first created and there isn't much he wants to change. Mostly, these notes are really clarifications rather than additional or changed rules. Such as the reminder that Clerics don't need spell books and that Magic-Users need to find new spells for themselves.
Some of these house rules are actually really affirmations of "Old School" playing style such as Potions having to be tasted, high level magicians have to be sought out to identify some magic items and no need for special "training" when a PC has enough xp to go up a level.  Plus the fact that the referee can start PCs off at a level appropriate to the campaign.
The modified rules for surprise are quite fun and it's worth noting how much difference this simple tweak could make. Two rounds of surprise is enough for either the players or the monsters to prepare or inflict quite a lot of damage to their surprised and confused opponents. I think on the whole though, this rule benefits the players more than the monsters as they are more likely to be able to inflict missile or spell damage from a distance before the Melee proper starts.
The statement that players must declare intent before rolling for iniative is interesting too. Of course, many players and DMs may do it that way already, but Gary obviously felt it necessary to tell his players this. Making players make tactical choices before they know who is going to act first should make them think a little harder and possibly be more cautious.
The biggest rule changes Gary makes are around hit points and all are designed to make characters survive longer (a tacit agreement here from Gary with a lot of players, who deemed the game as written was a little too tough!) Fighting-Men get the best deal... an extra hit point per hit dice is a big boost! Interestingly, this brings the average score rolled per d6, up from 3 to 4. Which is roughly the same average per die as BX's d8 for Fighters' hit dice. Fighters (and Fighters only) also benefit from a change in the boundaries on the table for extra damage due to high(ish) Strength. The final house rule to affect survivability is also a big one for those players and DMs who play Rules As Written. In Gary's game, you ain't dead at 0 hit points- just unconscious. To be properly dead you need to lose extra hit points equal to one more than your level. Obviously, this benefits higher level characters and is more generous than some house rules such as using a character's Constitution score as a guide to exactly how dead you are.

These house rules of Gary's have been out in the wild for some years now but I've never heard anyone say that they have tried them out. Perhaps that's because people are either happy with their own house rules for these aspects of the game or they are playing OD&D RAW. So there's my challenge to myself I guess. Next time I crack open my White Box, I need a copy of Gary's House Rules nicely typed out in the right font an tucked in with my Reference Sheets. 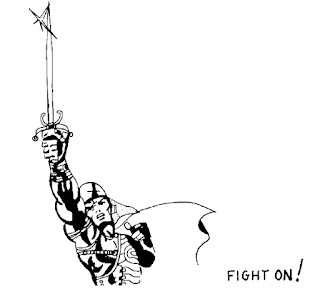