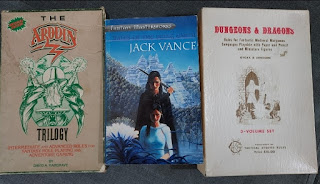 The Anxiety of Influence*

We are often told that Jack Vance was a huge influence of Gygax's vision for D&D. And indeed, reading the three little brown books it's clear that Vance is there in the mix. But it seems to me that Dave Hargrave's creation, Arduin, is much more Dying Earth than D&D straight ever was. It's not just the borrowing of some Vancian creatures (Deodand/Deodanth for example) nor the way in Arduin, every spell is named after the wizard who created it (à la Vance), but more so in the spirit of the world which comes through the writing. Arduin is famously odd and full of humorous eccentricity and absolutely as deadly a place to live as The Dying Earth. Magic in both worlds can propel any character to fantastic heights and then dash him to smithereens in an instant. Both places generate a picaresque feeling of multiple incidents flowing ever onward, all within a slightly off centred world. A place where unless you have your wits about you, a viciously random death is always waiting around the corner.

In Arduin as in Vance's world, the astonishing mixes with the mundane in almost equal measure. A casual conversation in the Dancing Termite Inn can easily lead to a sudden adventure in the be-trapped home of a tremendously powerful Rune Weaver magician for example. And everywhere in Arduin there is colour and variety- how many races can players choose from, thirty at least! In the Dying Earth, one might be transported by magic or the whim of a powerful sage to other dimensions (the Overworld and Underworlds) and in Arduin, portals and various meeting places of the dimensions exist to whisk a character off to almost anywhere in the Multiverse.

I don't know if an Appendix N of reading matter and influences exists for Dave Hargrave. But I'll bet Vance would be high up on the list if it did.

One of the great things about blogging is that quite often, you find the answers to the questions you have posed. Thus, I now have been reminded about the bibliography in The Arduin Adventure... and there's no Vance! Mind you, there aren't any other works of fiction either. Hargrave's reading seems mainly of the non-fiction sort. There is a short note 'thanking' several fiction writers however, chief amongst whom is Clark Ashton Smith. I have been told by someone who played at Hargrave's table (thanks CK!) that Dave was indeed a big Dying Earth fan and that he was in contact with Vance and even got an enthusiastic blessing to use the Deodand in Arduin. So there you go.

Now, it's seems about time I read some Ashton-Smith...