Scott Bizar of Fantasy Games Unlimited has shared with me that he is working on several more games from the FGU back catalogue which he hopes to re-issue soon. Archworld, the fantasy wargame and empire building game is on the list.

Archworld is an interesting one as it was created by the authors of the novels and is a great example of a game from that period when the campaign was at a world spanning level rather than a focus on individual heroes. As a set of rules, it speaks of it's time; lots of basing sizes, big tables of points to buy your troops for example. But these include heroes and magicians and so forth. These heroes can be bought (hired I guess) or you can 'grow your own'. It's the sort of game that is designed to last years with an ebb and flow of a changing political landscape. Certainly the sort of thing that could be used to have as a dynamic background to a role playing game of your choosing.

There are plenty of other gems in the FGU back catalogue, so more power to your elbow Scott! 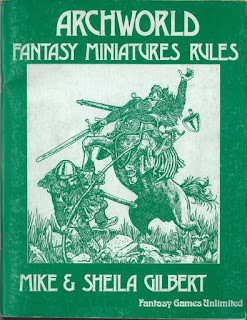