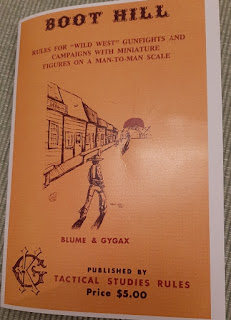 Boot Hill, 1975, was the third roleplaying game published by TSR and the second rpg to be designed by Gygax and co. It was developed by Gygax, Brian Blume and TSR co-founder Don Kaye and extensively play tested for a year before publication. It is dedicated to Kaye who died early in '75 although final writing credits are Gygax and Blume.
The game went through three editions between 1975 and 1990 with surprisingly little alteration of the main rules and mechanisms until the 3e which adds further abilities and skills amongst others. The first edition, the one I'm looking at here, was augmented in subsequent editions with maps, adventures, historical notes and biographies of famous gunslingers and lawmen.

All in all, compared with other TSR rpgs, Boot Hill was very poorly supported with only five (I think) separately published scenario/adventure booklets. However, when the first edition originally appeared, extra material, commentary and notes on how to mash up the game with D&D (and then Metamorphosis Alpha) began turning up in magazines and newsletters. Most notably in the Polyhedron magazine and the Strategic Review. 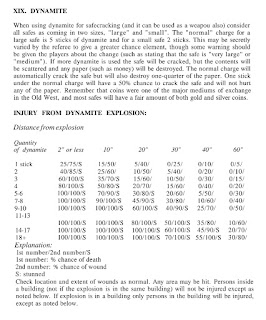 Boot Hill 1e came in the familiar format of early TSR publications, a 40 page digest/A5 booklet with sturdy pages and the ubiquitous cream card covers. 34 of these pages are rules and maps with the remainder being reference charts and an advert for other quality gaming products from TSR (who will, they claim, pay your postage for you but that if you live in Wisconsin there is a 4% sales tax!) It's all done in a style very similar to D&D of course, although the editing in Boot Hill seems somewhat better. That may be because although the game is obviously a role playing game, it is even more obviously of a wargame background than D&D. The characters' stats and the bulk of the game mechanics are about the process of shooting your opponents to pieces before they do the same to you. Interestingly, being as so much of the game is 1:1 scale skirmish battle, there is just a brief mention of using miniatures. It is assumed that the referee, much like a Dungeon Master mapping the underworld, will create a map of the town in which the action takes place. This map should then be covered with a plastic sheet so that grease pencils can mark the positions of the characters (presumably erasing and redrawing characters and NPCs- 'minor characters' as they move). I find this surprising considering that at this time, Marx and Timpo plastic toy cowboys for example, were very readily available. There is photographic evidence of Gygax and Arneson using such 1/32 scale models of knights for their D&D games! 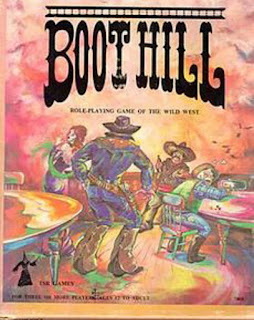 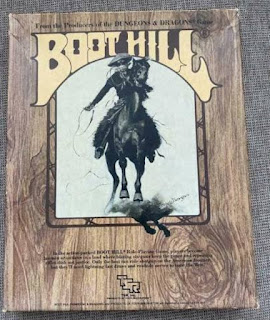 The rules themselves are reasonably straightforward, if a little table heavy. The book is split into the basic rules section, an advanced set of rules and finally some optional rules to make things more realistic (ie even more deadly). These optional rules and tables do something to lift the rules from a skirmish game to an rpg. For example, there are rules for sharpshooting, intoxication, gambling, posses, tracking and notes on ageing, together with a few pages on running campaigns. There are some rules which make an appearance here, before they became part of D&D. For example, there are hit location tables and rules for the effects of wounds in various bodily locations. Although not as complex as those which later appeared in Blackmoor, these hit location tables actually detail more areas of the body. Brawling and grappling rules were part of the Boot Hill game that later appeared in D&D. Mind you, what would a Western game be without rules to fight a bar room brawl? The rules for intoxication begin with this wonderfully understated sentence, "Alcoholic beverages affect people in various ways." Right. In Boot Hill booze reduces your gun Accuracy in exchange for boosted Bravery and extra Strength. Some players may feel this exchange worthwhile... until they are involved in gunfight. Boot Hill is a deadly game and anything that reduces a character's Accuracy is to be avoided at all costs! To round things off there are some fun rules for dynamite. These rules bring rather Wile E Coyote like images to mind with characters throwing huge bundles of dynamite sticks around the place!

It's worth noting that this game attempts to recreate the movie and TV Westerns that Gygax and Blume grew up with. In the current political climate, it's hard to see WotC or anyone else, issuing Boot Hill 4e, without considerable editing for political correctness. There is but one paragraph on 'Indians'- which is entirely devoted to special morale rules. Indians it seems, are very, very brave.

Finally, there is an interesting predecessor for Boot Hill. This is a set of rules written by members of a wargaming group in Bristol, England, in 1971. This is the 'Western Gunfight Wargame Rules' by Curtis, Colwill and Blake. Gary Gygax knew of these rules, as they had become something of a hit in wargaming circles in the UK and USA at the time. These rules are credited as introducing skirmish wargames as well as the use of 20 sided dice, marked 0-9 to produce percentile scores. 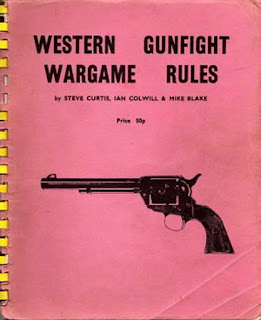 Copies of the first edition (there are two different versions of the cover) can be found online for a mere $900, whereas copies of the second and third editions, the boxed ones, can go for around $50-70 a piece. You may also see a version published in the early 2000s by Rogue Comet. This company produce  the Dungeonesque rpg and currently hold the rights to Boot Hill. I should also say that you can buy both pdf and POD reissues of 2e and 3e from Drivethru rpg.

Here are a few resources you might find useful:

This is Bud Wright's MeWe group, 'Boots and Saddles' (one of the best MeWe group names yet in my opinion!)