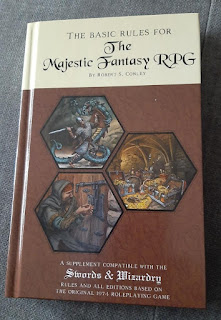 Rob Conley has been a stalwart of the fantasy role playing game scene for a long time. Always modest about his achievements his work has been published by major names in the field. However, he is probably best known for his work on the Wilderlands of High Fantasy- creating amazing maps and content for both the Judges Guild and Necromancer Games versions of that setting. His mini setting, Blackmarsh, which he created as a free product for gamers and designers alike, has been used as a campaign basis for Delving Deeper, Swords & Six-Siders, Heroes and Other Worlds and probably more.