Arduin Influences: A Triptych View—Part One

By Gabriel A. Roark 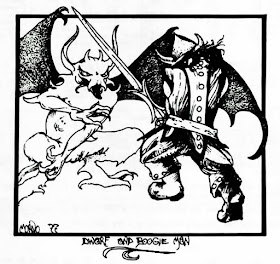 Publication No. 1a, Multiversalist Society of Sacramento

David A. Hargrave’s (DAH) The Arduin Grimoire (1977) is among the early, unofficial Dungeons & Dragons (D&D, Gygax and Arneson 1974) variants commercially published outside of the Great Lakes fold. The first volume of The Arduin Grimoire (AGI) was an outgrowth of DAH’s home campaign; subsequent Arduin releases not only brought mechanical variations on D&D but also revealed more about Arduin’s setting and history. The world of Khaas, in which Arduin is a small kingdom, is a complex milieu. DAH and several of the players in his Arduin campaigns devised cultures, laws, spells, races, and so on. What were the influences from which DAH weaved the rich tapestry of the Arduin Grimoires? Arduin gaming products and DAH’s correspondence are forthright about many of these influences. This short essay examines a fraction of the grist to DAH’s mill and highlights some areas where his reading and personal experiences manifest as Arduin rules and setting. In all of this, the existence of a new type of gaming—the fantasy wargame or roleplaying game (RPG)—is treated as a given and not as an influence as such. Although we could speculate whether DAH might have published an RPG had Tactical Studies Rules not published D&D (see Spoor 2012 for a little-substantiated report that DAH had claimed to have invented the RPG), the fact is that D&D was the catalyst for all RPGs that came after it. D&D was, in effect, the “Let there be light,” moment for the hobby we all enjoy. 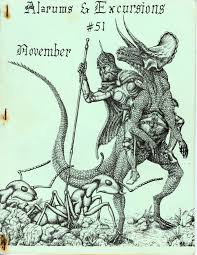 In discussing DAH’s source inspirations for Arduin, I find it convenient to group them into three categories: literary, historical, & personal. The literary category covers fiction—whether written or visual media—and is the subject of this part. The historical taxon and personal influences appear in part two of this article.

Literary influences on Arduin are multitudinous. DAH wrote about his sources of inspiration and recommended reading in several places: Arduin gaming books, amateur press associations, and professional gaming journals (Hargrave 1980:63–64). A prime example of his literary borrowing is the deodanth.

In Arduin, the deodanth is a playable race (that is, allowable for player characters as well as non-player characters). It was among the exotic monster options in RPG books when AGI was first published, although probably instantly recognizable to fantasy and science fiction fans of the 1970s. The deodand’s creator (Vance 1977:73) paints the deodand as, “taller and heavier than himself [Cugel the Clever], black as midnight except for shining white eyes, white teeth and claws, wearing straps of leather to support a velvet green shirt.”

DAH’s description is similar: “Deodanths are 6’ to 7’ tall ebon humanoids with flaming red eyes and silver claws and fangs. They wear military trappings, but no clothes.” (Hargrave 2008:208.)

As to the personality of deodands, Vance writes, “The Deodand, Mazirian knew, craved his body for meat” (Vance 2000:25). AGIII similarly characterizes deodanths: “They seldom take prisoners, and those they do capture, they have a tendency to eat (probably due to their totally omnivorous eating habits)!” (Hargrave 1985a:20, 2008:64)

Finally AGIII contains a thinly veiled reference to the creatures of Vance’s Dying Earth stories: “Thaumaturgical research confirmed the fact that they are an evolutionary hybrid of ‘undead’ Elven kind and some other dark and unknown thing. This supports the legend that they are lost time travellers from eons in the future, when the universe is old and the suns are dying.” (Hargrave 1985a:20, 2008:64; emphases added.) 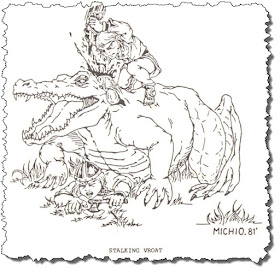 An associate of Hargrave’s recently pointed out to me that Lin Carter’s deodand might also have influenced DAH’s conception of the race. Specifically, both DAH and Carter describe Deodanths as possessing cat-like qualities. Carter’s deodand was a six-legged felinoid creature—very different from Vance and DAH’s physical descriptions, but DAH describes the basic social unit (to the extent that this solitary creature socializes) of deodanths as a pride. Lore has it that DAH secured permission from Vance to use the deodanth in Arduin. (Hargrave 1992:12; CK, personal communication, June 23, 2019.)

~To be continued in Part Two~ 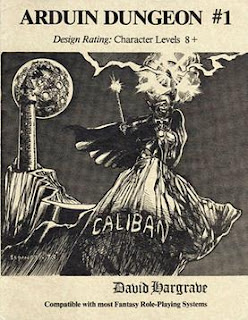